Let me tell you something you already know in the abstract. But because big numbers have a way of dulling my perceptions, I’d like to start by breaking them down a little bit so that I, at least, have an idea what I’m saying. To help us both, I’ve enlisted the aid of Alina Kroll. 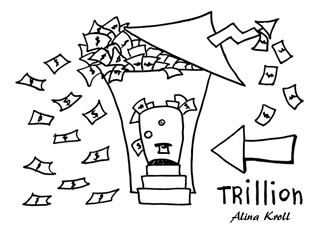 A billion is a thousand million. A trillion is a million million. The largest denomination bill the United States prints is the one hundred thousand dollar bill. It bears the picture of Woodrow Wilson, and is used exclusively for transactions among banks. So a trillion dollars would be a room full of ten million of those suckers.

OK. In 2012, the United States finished $1.083 trillion in the red. It did much better this past year, ending only $973 billion in the hole. And next year, the President’s budget promises, will be even better – a deficit of only $744 billion. By that time, the national debt will be thirteen trillion, two hundred ninety-six billion dollars.

Once, Ronald Reagan was trying to describe the national debt in terms we could comprehend. “There was a man who had worked and saved all his life, and had managed to save two hundred thousand dollars,” said Reagan, who had a fondness for apocryphal stories. “And because he was a patriot, he decided to leave it all to the United States. And do you know how it was spent? Paying for two hours’ worth of interest on the national debt.”

Well, Ronnie, those were the gravy days. Interest on the federal debt will run to $223 billion this year, according to the President’s budget, which calculates down to $7,071.28 and change per second. The bequest of Reagan’s patriot would last twenty-nine seconds now. 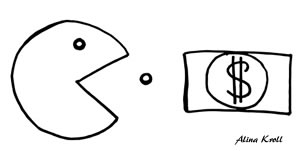 Here’s another way to think about this. In the time it’s taken you to read this far, interest on the national debt has grown by about $70,000 – more than the annual salary of the average American.

Jack Kemp used to call people worried about the deficit “eat-your-vegetables Republicans.” He may have been right in his time but we are now in a national episode of economic scurvy. Here’s why: Social Security payments from workers and their employers are no longer sufficient to pay the benefits of retired folks. Last year, Social Security paid out $813 billion to retirees and the disabled, while taking in only $673 billion. That’s a deficit of one hundred forty billion dollars. And this year it will be almost as bad: we will pay out $860 billion and take in $729.

In 2018, when the principal action of The Seduction of Braulio Jules begins, the President’s budget predicts that we will pay out one trillion, eighty billion in Social Security payments and take in only $917 billion – a deficit of $163 billion. And for the four year period between now and 2018, the budget anticipates that we will spend $4,837,000,000, and take in $4.129 trillion – a deficit of $708 billion.

Medicare is even worse. Last year, we paid out five hundred four billion for medical expenses, while taking in only two hundred eight. Between 2014 and 2018, the President’s budget estimates, Medicare will cost us two trillion, eight hundred thirty-two billion. Medicare taxes will bring in one billion, two hundred sixty-eight billion – a deficit in excess of a trillion dollars. 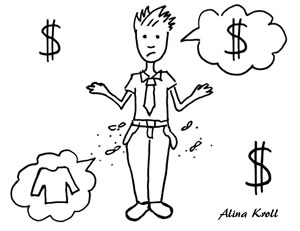 In theory, the Social Security deficits should be paid out of something called the Social Security Trust Fund. This fund is made up of all the extra money from when the government took in more from Social Security taxes than it gave out – essentially from the beginning of Social Security until a few years ago. The term – Trust Fund – invokes the image of a big old pile of money behind a bank vault door, protected by a confluence of MBAs, possibly armed.

And what are the chances that the US will pay it back? Well, the nation has never defaulted on its bills, although, as you know, we came very close last year. But I’m not certain we can pay these bills:

The budget’s rosy scenario has us with a smaller deficit each year, but the national debt will continue to grow. By 2018 it will be nearly sixteen trillion, and by 2023 – the last year which the budget projects – it will be a little over nineteen trillion.  Interest on the 2023 debt alone will be $804 billion – nearly 16% of all the money we expect to take in.

Some economists pooh-pooh these enormous figures, and think that the only figure that matters is the ratio between debt and gross domestic product. I don’t see it that way, unless we figure a way to cull some of that GDP to pay off the debt (like by raising taxes).  But anyway, let’s take a look at what those figures show: 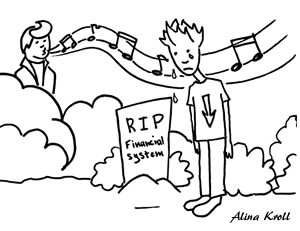 If that assures you, you are whistling in the graveyard. In Spain – one of the countries (along with Portugal, Ireland and Greece) which is hovering on the edge of bankruptcy – debt owed the general public is 85.3% of GDP.

We are not the only country with these problems, and we are not doomed, but we are going to have to start making hard choices. The massive baby boom generation is edging into retirement, and will live as pensioners for a long time. Will we be able to pay for them? Where will we find the money?

That’s what I find so intriguing about some Representatives – real live politicians, not academics or blog-writers like myself – who refuse to support the long-term extension of unemployment benefits. The Congressional Budget Office estimates that the extension of unemployment benefits for a year will cost $26 billion – that is, twenty-six thousand million – and you may think that a mere bag of shells. But as Everett Dirksen said, a few billion here, a few billion there, pretty soon it adds up to some real money.

Elected representatives who propose new taxes – not just on the wealthiest 1% but on everyone – are also heroic. Officials who support the elimination of government programs which do good work but not work essential to the Republic are also heroic. Officials who tell their constituents that we will no longer live as well as we have because we don’t have the resources to do so are heroic.

It is heroic every time a politician stands up and asks us to sacrifice. It takes leadership. We haven’t been asked to make a financial sacrifice as a nation since World War II. Most of us don’t know how.

But our serial acts of self-indulgence have created the crisis of a generation. We are on the way to becoming a nation of mendicants. And it will only get worse.

Are there any heroes out there?