From Romney to Dracula:
DC Actor Lee Ordeman Finds Himself at Home in the Most Extraordinary Characters

Two years ago, Lee Ordeman played Mitt Romney at several dates in the Washington-Baltimore area. He was a natural: Ordeman, the son of a Marine, imitated the ramrod-straight Romney effortlessly. “One of the Barack Obamas told me that I was the best Mitt he had worked with,” Ordeman said. “It sounded weird when he said it.” 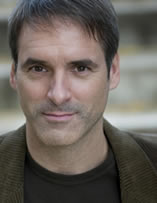 This year it gets weirder still. Ordeman will be playing Vlad Tepes – Count Dracula – in the Fringe production, Dracula. A Love Story.

This is not your father’s Dracula. In this modern retelling, Tepes is a lobbyist – for an HMO! – with a terminally ill wife. He engages young Lucy Cervas (Carolyn Krasner) to read to Mina (Christine Hirrel). Lucy, bored by her life and particularly with her fiancée, (Joe Brack), finds herself fascinated by the passion which drives Vlad to love Mina, even in these extreme circumstances.

“Lucy seeks rapture,” says playwright Tim Treanor, “but she doesn’t realize that rapture can be had in ordinary events, by ordinary people.”
Ordeman is himself a somewhat extraordinary man. An athlete who is an expert in the Japanese martial art Shintaido, Ordeman spent years in Japan as a teacher, a dancer and a journalist before becoming an actor. He wrote and edited for the Japanese-language Japanese Times, and joined the studio of avant garde choreographer Kei Takei. Only when he returned to the Washington area did he consider becoming an actor.

He studied under Paul Berman, and received his MFA in Acting from Catholic University. Since then, he’s been in the Sam Rockwell-Olivia Wilde movie Better Living Through Chemistry (with Jane Fonda and Ray Liotta) and on HBO’s Game Change. He’s acted at Scena and in the web series Drakul, where he is not Dracula. And he’s been Mitt.

“I’m interested in the human aspects of my characters, no matter how unusual they are,” Ordeman says. “I like this script because I’m working with a character who is at first human – yearning and frustrated – and only afterward the ‘great and lawless vampire.’ Plus, of course, I’m working with two first-rate directors and an excellent cast.”

One thought on “Lee Ordeman stars as Dracula”