Lee Hurwitz and I were honored to be interviewed about Capital City by none other than Deborah Kalb, journalist, author of children’s books and co-author, with her father, legendary journalist Marvin Kalb, of Haunting Legacy: Vietnam and the American Presidency from Ford to Obama.

She has a blog dedicated to writers and had some good questions for us.

Read how we answered here.

There was a time when Brian Crane, an archeologist who plays a psychiatrist in Dracula. A Love Story, had a special congress with the dead.

“While an undergraduate, I volunteered with a project at the University Museum to prepare their first computer catalog of objects,” Dr. Crane explained.  “We were working with a collection from Bronze Age burials in Russia. Our job was to check the description on a hand written index card with the objects in the corresponding box.

“My first card read ‘phalange and ring.’ A little puzzled, I opened the box, and yup, there was a ring still on the partially mummified remains of a finger. The next card read ‘ear rings.’ A little shaken by my first item, I opened this box a little more slowly. The ear rings were in the box as promised. And so was the ear.”

Crane pursued his duel career as an archeologist and an actor, finding a position at the Smithsonian after obtaining his PhD. It was not always good times. Crane recalls a particular incident  “when a forensic anthropologist colleague down the hall at the Smithsonian had a 19th-century burial in his office that still had a lot of soft tissue. The smell was so bad the entire anthropology department had to evacuate the building. They later gave him a lab. In the basement.”

Crane accumulated an impressive set of credentials in the acting profession, appearing in There is a Happiness that Morning Brings, Les Justes, Richard III, Hotel Fuck, Secret Obscenities, Small Craft Warnings, Peace, Red Noses, Edward III and Caligula. Most of his work has been with WSC Avant Bard and its predecessor company, Washington Shakespeare. “I have a tremendous amount of confidence in the work of that organization,” Crane said. “Christopher Henley and Jay Hardee worked hard to make WSC productive, and I was proud to be part of that effort.”

Dr. Crane is confident that Dracula will render the same sort of result. “I am impressed with the degree to which this play is faithful to the historical record, and also with the steps Christopher and Jay have taken to make sure that the production is accessible and emotionally satisfying. This is a big story, and they are doing it justice.” 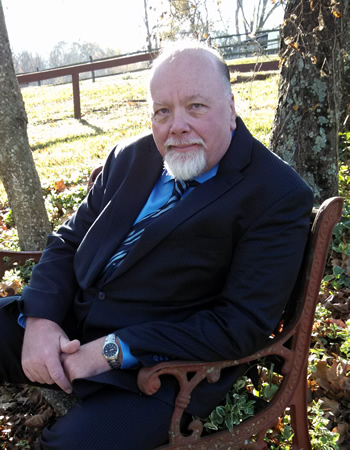 Over the past nine years, Tim Treanor has reviewed over five hundred plays for the theater website DC Theatre Scene. He’s reviewed musicals for The Sondheim Review, and is now Vice-President of the American Theatre Critics Association. Over that time, he’s said some caustic things, especially about plays in the Capital Fringe Festival.

It was time, he decided, to get “in the box” – to put his own play out there for others to judge.

The result is Dracula. A Love Story, a modern retelling of Bram Stoker’s 1897 story of a suave but monstrous killer who sucks the blood out of some people, and turns others into vampires like himself.

“It struck me that the story is as powerful now as it was in the Victorian age,” Treanor says. “People were confused and frightened by science back then, just as they are now – with climate change denyers and creationists, for example. It somehow becomes comforting to read a story about a supernatural creature.”

Fifty years ago, Treanor points out, popular writers Zane Grey, Earl Stanley Gardner, Ian Fleming – wrote about flesh-and-blood heroes. They were outsize personalities, to be sure, but they were unquestionably human. “We’ve grown a taste for the extra-human hero now,” Treanor says. “Vampires, zombies, werewolves. Fifty years ago, they were the threat. Now they’re often the heroes.”

Treanor’s Dracula, based on the savage 14th-century Romanian aristocrat, is no hero. “But I was interested in deconstructing the vampire, to see what makes him tick – or what makes him make us tick,” the playwright says.
Part of it borders on the religious. “Only two people ever said ‘drink my blood and live forever,’” Treanor points out. “One of them was Dracula.

“And there is undoubtedly a sexual frisson, particularly when he invites someone to become a vampire. The choice he gives Lucy is to surrender herself, surrender her personality, to be transported and transformed by this great creature, and to live forever.

“And that living forever part, that’s pretty cool. I mean, that’s hard to resist. And if the price is that you have to kill humans for food – well, it’s a little easier to pay after you cease being human yourself. After all, most of us don’t have any compunction about killing and eating other animals, as long as the animals aren’t cute. And that’s pretty much true for most carnivorous animals – they’re not cannibals, but they kill other types of animals without giving it a second thought. So why would a vampire be reluctant to kill a human? I tried to make that clear in the play.”

Dracula’s ability to create other vampires reminds Treanor of two things common in everyday life – lobbyists and viruses. “Dracula’s technique is to be persuasive,” Treanor says. “He doesn’t burst in and overpower anybody. He tries to convert you to his point of view, just like a lobbyist does, and when he succeeds, he changes you into himself, just like a virus will change the DNA of a good cell into itself.” In the play, Dracula takes on both aspects – he poses as a lobbyist by day (for an HMO!), and Dr. Calderone calls him a virus.

Dr. Calderone (played by Lynn Sharp Spears) is one of Treanor’s principal points of departure from Stoker’s story. “In 1897, gender roles were pretty clear: all the heroes were men, and their job was to rescue fair maidens. But that’s all nonsense now.” Treanor gave a woman the powerful job of fighting the vampire “because women do heroic things routinely, and our culture recognizes that now.”

This is Treanor’s first serious effort as a playwright (he wrote what he calls an “interactive murder mystery” for his local community theater about ten years ago – “you know, you guess the killer and get a prize, but no character arc or anything like that.”) and he calls this process “challenging and counterintuitive.

“When you write a novel (Treanor’s novel, The Seduction of Braulio Jules, is available in paperback and ebook ), or a review for that matter, you have to convey every piece of information through words. But with a play, much of the information will be conveyed through staging and acting. When I heard the first reading at Christopher and Jay’s house (co-directors Christopher Henley and Jay Hardee), I realized that I had seriously overwritten the play.” He quickly rewrote it and now has a script which, he says, “will sizzle in the hands of these actors.”

Co-Director Christopher Henley’s fascination for the Prince of Darkness

Lee Ordeman stars as Dracula in Dracula . A Love Story 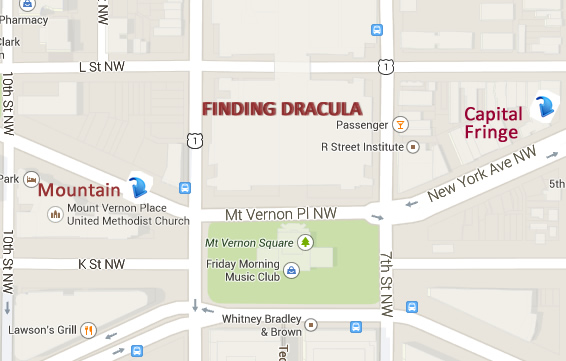 Among the bogeymen on the fringes of human consciousness, Dracula stands alone. Frankenstein, Godzilla, and werewolves inhabit our nightmares; Dracula is the gleaming demon of our dreams.

The other monsters look out at us with animal rapaciousness and subhuman intellect. Dracula fixes us with a cool gaze. He is older than us, more powerful, profoundly more intelligent.

He loves with the force of gravity.
He loves with his whole being, and demands unconditional love in return.
He promises eternal life, and calls upon us to drink his blood.
This is not how men love. This is how God loves. This is rapture.

Dracula . A Love Story
a modern retelling of the Dracula story
by Tim Treanor
Directed by Christopher Henley

see it live this summer at the 2014 Capital Fringe Festival in Washington, DC